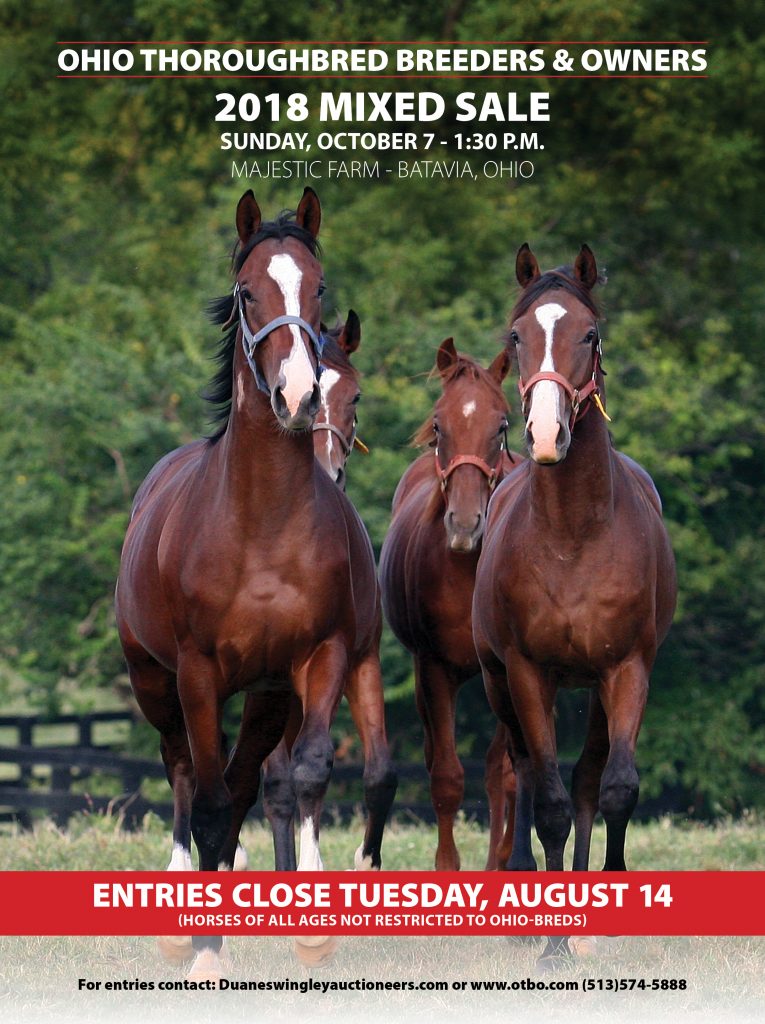 OHIO THOROUGHBRED BREEDERS & OWNERS
2018 MIXED SALE ACCEPTING ENTRIES
The O.T.B.O. will hold its Mixed Sale on Sunday, October 7 at Majestic Farm at 1:30 p.m. The sale is open to thoroughbreds of all ages and is NOT restricted to Ohio-breds. Entries close Tuesday, August 14 and you can obtain entries at Duaneswingleyauctioneers.com

“We moved the date back this year, so it would fit between the two Kentucky sales,” said Executive Director John Engelhardt. “Last year we had 103 entries. After entries are accepted they will be posted on-line through several entities. There are advertising opportunities available and we will be widely distributing the catalogues to all regional HBPA offices, active racing venues, consignors, advertisers and individuals upon request. With over $7.43 million available to Ohio-bred winners and breeders this is a great time to get in the game.” The sale will again take place at Majestic Farm in Batavia.
For more information you can call the O.T.B.O. office at 937-723-6026 or email – ohiobreeders@gmail.com. You can also register your cell phone to receive Mobile Text Alerts. Text OTBO to 781-728-9542 or email your cell phone # to the office.
BELTERRA PARK PLAYS HOST TO A DUET OF STAKES OVER
THE 4TH OF JULY HOLIDAY – the $75,000 HOOVER AND CINCINNATIAN
This year’s 4th of July celebration seemed to start on the last day in June and run through the 8th as it fell in the middle of the week. The Ohio Stakes calendar placed two stakes on the picnic tables at Belterra Park on Saturday the 7th. The first one served up was the Hoover Stakes for 2-year-olds going 5 ½ furlongs.
As happens often this time of the year, Tim Hamm shows up with team of juveniles, well bred, fit and ready to run. In this year’s edition he sent three postward in the field of nine that he bred in partnership with WinStar Farm. The trio was made the slight favorite over Drillit, a Robert Gorham trainee who scored impressively in his debut by 8 ½ lengths on the Ohio Derby undercard. 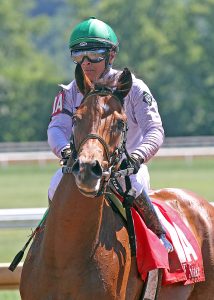 After some rambunctious moments at the gate by Mari Chuy, the only filly in the field, they were sent away in good order. WinStar colorbearer Galactic sprinted to an early contested lead and after three furlongs was overtaken by stablemate Diamond Dust. From there it was all over but the ticket cashing as Luis Colon drew off at will to hit the wire 4 ½ lengths ahead of Drillit who chased from the quarter pole home. Going With Style finished third over first-time starter Got to Get Out. The final time was 1:05.54
“At this point it’s easy to say she is the most professional of the group,” said Hamm. “I think Private Drive is going to improve as distances get longer. But the family of Diamond Dust is really hot right now. I have a half-sister by Drosselmeyer who has won three in a row and she’ll probably start in the Queen City Oaks and her 4-year-old sister just reeled off three in a row. I trained her dam Radiant Sky and she was very, very fast.” Diamond Dust is a gelded son of Paynter out of Radiant Sky by Leroidesanimaux (BRZ).
While the Hoover introduced us to a promising equine youngster, the following Cincinnatian Stakes put the talents of a young rider on display. The 1 1/16 mile turf test for 3-year-old accredited bred fillies had only two entrants who had raced over the grass before. Mike Rone owned and trained No Truer was sent away as the pastime favorite. She had won the $75,000 Glacial Princess as a 2-year-old and had faced older company in all three of her sophomore starts.
Another in the field that had only faced older rivals this season, and had won two of three, was Mobil Bonnet. Trainer Jennifer Tooley elected to make a rider change and gave a leg up to 21-year-old Jarred Journet who put in a picture-perfect ride…except for one slip. “She broke out of there well and I decided to save ground,” said the mild-mannered rider from Louisiana. “About the middle of the turn I could feel my saddle starting to slip. I’ve got some height, so I used my legs and didn’t touch her. I was waiting to see if Perry (Ouzts) was coming off the rail and finally decided to go ahead and split them and we went clear from there.”

The victory in the Cincinnatian was the first career stakes win for Journet. “I’ve had some close calls in stakes before, but this is special. I feel great – it’s like my first win, not just my first stakes!”
Mobil Bonnet went on to win by two lengths in 1:46:18. Birdacious, who had a troubled stretch run came on to get the second spot by a neck over pacesetter Mandi’s Pride. Cincinnati is famous for its Chili Parlors and their unique three-way chili. In a race named after the city its fitting that O.T.B.O. Board member Dr. George Sikora had to sweat out a three-way objection that was not deemed necessary by the stewards and benefitted from a three-way payday. Sikora heads up Mapleton Thoroughbred Farm who owns and bred Mobil Sonnet and stands her sire Mobil, thus collecting the purse, stallion and broodmare awards.
Ohio stallion Mobil stands at Mapleton Thoroughbred Farm in Polk for a fee of $2,500. A son of Langfuhr, he won $1,877,136 and finished second in the prestigious Queen’s Plate. As a 4-year-old he was voted Champion older male in Canada.

IT WAS “LADIES DAY” IN THE CLEVELAND GOLD CUP …KIND OF
The 3-year-old filly Misshap was successful over her male counterparts in the 1 1/16 mile turf test in the $75,000 Green Carpet in her last start and her connections decided to try her again against the boys in the $75,000 Daniel Stearns Cleveland Gold Cup on June 30. Despite making her first start over the main track at JACK Thistledown and trying 1 1/8 miles for the first time, she was backed at the windows to 6 to 5.

The horse that was making his first start of the season and was closing fast on Misshap in the Green Carpet, Forwarned, was overlooked by the public at 16-1. Enter the other “Lady” in the race – jockey Megan Fadlovich. Whether playing polo, barrel racing or riding in a rodeo shooting targets with a six-shooter, the 28-year-old is always up for a challenge. “Pavel Matejka would often call me when his regular rider couldn’t make it to Mountaineer,” said Fadlovich. “As soon as he asked if I could ride Forwarned I started looking at his races. He would get back and make a big run and I thought it might be better to stay with the pace. He ended up being relaxed there and we had to work hard but we caught the leader in the final few strides.”
The horse Megan caught was Fusaichi’s Wind who was on the lead for all of the race but the final strides. He lugged in near the furlong pole and shut off Over Icce and the stewards reversed their order of finish, placing Over Icce second. Favored Misshap ran fourth behind the top three. Forwarned covered the 1 1/8 miles in 1:53.08. Forwarned is a son of Flat Out out of Fortune Play by Five Star Day. He was bred and is owned by Preston Stables LLC.

GRADE 3 $500,000 OHIO DERBY TO CORE BELIEFS
With the Triple Crown in the history books, it is time for racing’s “second season” to begin and the 84th running of the Ohio Derby drew a talent-laden field of horses and horsemen. Predicted rains never developed and a large crowd made their way to JACK Thistledown as a field of 11 loaded in the gate for the 1 1/8 mile event. As expected, two-time graded stakes winner Flameaway set the early pace, but he had plenty of company along the way and tired as he entered the stretch. Lone Sailor, coming out of the Kentucky Derby and Preakness, rallied strongly along the rail with Irad Ortiz, Jr. and took the lead. Moving with the same momentum, Core Beliefs and Joe Talamo ranged up on the outside and as they crossed the finish, a dead-heat was not out of the question.

Anxious moments ensued and the placing judges determined it was Core Beliefs that got his nose down in the final stride after taking the overland route from post position 10. The son of Quality Road stopped the timer in 1:51.08 while recording his first graded stakes victory for owner Gary Broad and trainer Peter Eurton. Local hopeful Trigger Warning held on for the third spot.
In celebration of the 50th anniversary of his Ohio Derby win aboard Te Vega, retired jockey Mike Manganello gave out the trophy. Manganello was a standout rider on the Thistledown circuit in his early days of racing and had plenty of his old acquaintances stop by to greet him throughout the afternoon.

GALLOPING OUT…The ageless wonder Perry Ouzts celebrated his 64th birthday at Belterra Park over the 4th of July holiday with one win and a placing in the Cincinnatian Stakes. Ouzts tops the rider’s standings by 16 wins with 56 first-place finishes. Ouzts was the central figure of an Eclipse Award winning documentary available for viewing on You Tube at “Ironman: Perry Ouzts”. Jockey Ricardo Feliciano tops the standings at Thistledown with 40 wins.

2-year-old Ohio Player was on fire in his debut when he rallied to set a new track record at Belterra Park on July 6, pulling away by 7 1/2 lengths to stop the timer in 53.07 while going 4 ½ furlongs. He is the last of the line for his sire Alphabet Soup, who retired to Old Friends Retirement following his final season as a stallion that produced Ohio Player who was bred in Ohio by Hal Snowden, Jr.

Facebook
Twitter
LinkedIn
Email
PrevPreviousOTBO PAST PRESIDENT DR. PAUL GUTHEIL PASSES AWAY AT 78
Next81 HORSES ENTERED IN OHIO SALE OCTOBER 7Next
Sponsored by: