Mast Thoroughbreds 2018 2-year-old Filly Champion Drillit looked like her old self as she pulled away by 12 lengths in a hand ride to capture the $75,000 J. William Petro Memorial Handicap at Thistledown on June 18. Last season the Bob Gorham trainee won only one race, her season finale in the $75,000 First Lady at Mahoning Valley. Preceded by a series of close calls and placings in the Queen City Oaks and Tomboy Stakes, she still bankrolled $92,610 on the year. Now, as a 4-year-old, she appears to have grown into her own.
Outside of her trainer, no one knows her better than Jockey T.D. Houghton, who has been in the saddle for every one of her lifetime starts. “At 2 she was one of the classiest horses I had been around. Young horses will fool around a lot in their training, but she just went about her business, she was so nice. She was narrow and still pretty little, but she could run. As a 3-year-old she didn’t fill out as much and I figured she was just going to stay on the small side.

Mother Nature and Father Time worked their influence over the winter and when Houghton first saw her this season it was a pleasant surprise. “You could see it in her stall – she looks like a big horse now. She’s fully developed, easily bigger this year than last. She came right out of there in the stakes and I had to reel her in a bit. I didn’t want to use too much of her as she was going long for the first time and she relaxed and stayed off the top two.”
Houghton found himself on the lead as they rounded the turn. “She switched to her left lead and went to another gear, I still didn’t want her to go yet due to the distance. She was going strong and when I uncocked my stick she took off. I looked back for Leona (even-money favorite Leona’s Reward) outside and inside and no one was there so I just let her go on her own.” She hit the wire a dozen lengths in front of Leona’s Reward, with 3-year-old Moonlit Mission in third. The final time for the 1 1/16 miles was 1:47.60
Bred in Ohio by Eric Heyman, the chestnut filly is by Drill out of Way to Fly by Bowman’s Band. She now sports a record of 18-6-5-5 for earnings of $339,710. Her sire Drill, previously stood in Florida, but was moved to Ohio this year and stands at Raimonde Farms in Wooster.
____________________________________________________________________________
RADOSEVICH RUNNERS RUN 1-2-3 IN $75,000 GEORGE LEWIS MEMORIAL
A field of eight Accredited Ohio Breds went to post in the $75,000 George Lewis Memorial Stakes two races following the Petro. A look at the field shows that it pays to have an Accredited-bred, 7 of the 8 had earnings over $136,000, topped by Mobil Solution’s $420,520. Over half of the field would be stretching out in distance as they last raced at 6 furlongs in the Mike Rowland Memorial and would be going 1 1/16 today. 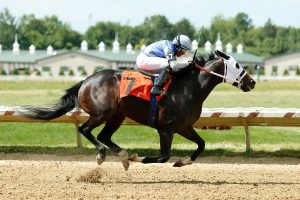 When the gates opened, Pat’s Karma was bumped by Direct Deceit and he responded by taking a quick lead over that rival. Mobil Solution, Funnel Cake and Verissimo stayed very close to the top two and the entire field, with the exception of longshot Master Legionaire who trailed throughout, stayed tightly bunched all the way down the backstretch. Into the turn, Pat’s Karma relinquished the lead to favored Mobil Solution.
Into the stretch, Luis Rivera stretched the lead to two lengths and with a few right-hand taps kept the 5-year-old gelding clear by 2 ½ lengths, over stablemates Verissimo who caught Pat’s Karma in the final furlong. The top three are all conditioned by Jeff Radosevich. Mobil Solution, who came up a half length short of winning the race last year, pushed his career earnings to $465,520.
Owned by Gerald Silver, Mobil Solution was bred by Mapleton Thoroughbred Farm. He is a son of Mapleton stallion Mobil out of Perfect Solution by Seeking the Gold. He now has a career record of 26-8-8-6.               Photos courtesy of Jeff Zamaicko
__________________________________________________________________________
SPECTATORS TAKE TO THE TRACK AT BELTERRA PARK FRIDAY, JUNE 19
A moderate to small crowd attended the races for the first time this year at Belterra Park on Friday, June 19. It was a rather hot day, but the track has well-spaced Umbrella tables on the apron. The box seats were limited to a every-other-row accessibility. Fans were allowed to make wagers at both the grandstand mezzanine area and the indoor RaceBook.
There were temperature checks at all entrances and while patrons were not required to wear masks, they could be issued one at each Security Podium. With steady reminders from track announcer Ed Meyer, patrons complied with social distancing throughout the grandstand. There were eight Thoroughbred races and one Quarter Horse event. The nine-race handle was $720,038.