Oct. 13, 2018 (NORTH RANDALL, OH) – The baton passed in the Ohio sprint division Saturday at JACK Thistledown Racino as Altimisso shrugged off a blistering pace duel and drew away to dominate the $150,000 Best of Ohio Sprint by nine lengths over Coincidentally. Five-time Ohio Sprint champion Rivers Run Deep was a farther half-length back in third on the sloppy track. 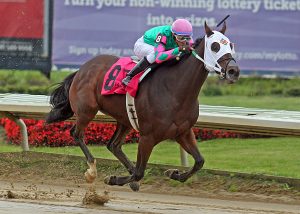 Under pressure from Altissimo, Moves Like Ali clocked the first quarter in :21.82, the half in :44.80 and five furlongs in :57.66, but he gave way nearing the eighth pole while Altissimo kept rolling to finish the six-furlong race for 3-year-old and up registered Ohio foals in 1:11.02.

Asked if he were worried about the pace, trainer Richard Zielinski grinned and said, “No. He just continues to impress me. We wanted this a year ago.”

A year ago, Altissimo finished off the board in the Sprint. Has the baton passed? “I think so,” Zielinski said.

A 5-year-old son of Noble Causeway, Altissimo is out of the Albert the Great mare Great Goin Rose. The win ran his record to 12 wins, three seconds and four thirds in 31 starts, with purse earnings of $409,388 for owners Nancy Lavrich and Ronald Zielinski. He was bred by Lavrich and Niknar Farm.

MO DONT NO THREE-PEATS IN BEST OF OHIO ENDURANCE

With Scott Spieth aboard, Loooch Racing Stables’ Mo Dont No held tight to the baton in the Ohio handicap division, coming from off the pace to win the $150,000 Best of Ohio Endurance for the third straight year, this time by 12 lengths. Let’scalliteven was second, 1 1/4 lengths ahead of the winner’s stablemate Fusaichi’s Wind. 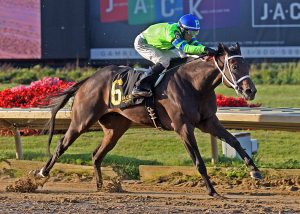 “The track set up for him good today,” said winning trainer Jeff Radosevich. “It doesn’t matter to him whether he comes off the pace or not, as long as he’s looking at [the target].”

Ron Paolucci, the “Loooch” in Loooch Racing Stables, is considering giving Mo Dont No a shot at the Breeders’ Cup Mile (G1) next month at Churchill Downs. “I think this is the first time the whole year we’ve had him 100 percent, and he’s beaten everybody in Ohio,” Paolucci said. “So, let’s give him a chance to see what he can do.”

By Uncle Mo out of Lilah, by Defrere, 5-year-old Mo Dont No was bred by Beechwood Racing Stable. His record stands now at 17 wins and seven seconds from 28 starts, with earnings of $848,080.

With John McKee in the saddle, Takechargedelilah charged from 15 lengths behind a hotly contested pace to take the $150,000 Best of Ohio Distaff by 1 1/4 lengths over Leona’s Reward. School Board Prez was up for third, another 2 1/4 lengths behind.

Leona’s Reward set a blazing pace for the 1 1/8 mile race for registered Ohio foals 3 years old and up. With Proper Discretion right on her flank, Leona’s Reward clocked the quarters in :22.62, :46.62, 1:12.22 and 1:41 flat before Takechargedelilah caught her inside the final half-furlong to finish in 1:55.48 over the sloppy track.

The Distaff was delayed over an hour, first by a gate malfunction and again when Grizabella flipped in the gate. The delay took more of a toll on winning trainer Tom Drury Jr. than on Takechargedelilah.

“She handled [the delay] a whole lot better than I did,” said Drury. “When she came back [to the paddock] we threw a blanket on her and

when we took it off she was still calm and cool. I felt good about her and the race set up like we thought it would. Johnny made the comment that it looked like there was a lot of pace in the race. This filly, you can do what you want with her, so I wasn’t really worried about that. I was concerned about the off racetrack but she got over it well.”

By Take Charge Indy out of Lilah, by Defrere, Takechargedelilah now has four wins and two seconds in seven starts and earnings of $233,790 for owners StarLadies Racing. She was bred by Steve M. DeMaiolo.

Oct. 13, 2018 (NORTH RANDALL, OH) – Mast Thoroughbreds’ Drillit romped in the $150,000 John W. Galbreath Stakes for juvenile fillies at JACK Thistledown Racino Saturday, taking over at the five-eighths pole and drawing off to win by 16 1/4 lengths under jockey Terry Houghton. Totally Obsessed was second, two lengths ahead of Baby Nina in third.

The daughter of Drill was already a stakes winner going short, having won the Tah Dah Stakes in her last start. The Galbreath was her first start around two turns. Swindle set the quarter in :23.68, but the rest of the pace was all Drillit, the half in :48.82, three-quarters in 1:16.04 and the mile in 1:43.44. She finished the 1 1/16-mile race for registered Ohio foals in 1:50.22 over the sloppy track.

“I had a suspicion this filly had a cruising speed,” said winning trainer Bob Gorham. “These big races, you get a little nervous to get the first one under [her] belt, but she calmed me down. She came to the paddock and looked so good, so quiet, with so much presence for a two-year-old—rather than me calming her down it was vice versa.”

Out of the Bowman’s Band mare Way to Fly, Drillit was bred by Eric Heyman. Her record stands now at three wins, one second and one third from five starts, with $175,500 in earnings.

After setting the pace, Diamond Dust cracked the door for his rivals in the $150,000 Juvenile Stakes when he ducked out about the sixteenth pole, but jockey Luis Colon got him right back in line to finish four lengths the best over Captain Corn. Send Me On was another 2 1/2 lengths back in third.

“He never stayed in the front all the way in his other races,” said winning jockey Luis Colon, “so when he saw the crowd he ducked out a little. It scared me a little bit because they were coming, but my horse was much the best.”

Despite the hiccup trainer Tim Hamm said, “It was perfect. We watched the races all day and weren’t sure how the track was playing, but by this race we figured out you had to be on or near the lead. It’s hard to make up ground when it’s a little bit heavy. The stretch is heavier than the backside, so we figured if we could get to the stretch in front it would be hard to pass us. The first quarter was plenty fast but then you see the 49 [for the half]. Luis did an awesome job backing him up.”

The Juvenile was Diamond Dust’s second start around two turns following a neck loss in an allowance race at JACK Thistledown Sept. 3. Hamm noted the benefit of the prep: “I thought he would handle the distance fine. We were very glad we got two turns in him. At this age, that means a ton.”

A gelded son of Paynter out of Radiant Sky, by Leroisdesanimaux (BRZ), Diamond Dust now has three wins and two seconds in five starts, with earnings of $170,300. He was bred and is campaigned by WinStar Farm and Hamm’s Blazing Meadows Farm.