Ron Paolucci Racing LLC and trainer Gary Johnson are off to a quick start in the 2019 Ohio Fund Program as they captured the first stakes of the season with a dominant win by Totally Obsessed in the $75,000 Southern Park at Mahoning Valley on March 23. Except for two off-the-board starts against open company at Churchill Downs and Gulfstream Park, Johnson has trained Totally Obsessed.

“To be honest, I kind of rushed her for her 2-year-old first-out maiden win, but you got to go with the condition book or you may be waiting for a month,” Johnson stated. “She was still green, but her sheer talent took her to an easy 6 ¾ length win.” Her second start would be against her 2-year-old nemesis Drillit in the Kevin Goemmer Tah Dah Stakes at Belterra Park. “We finished second by a length, but should have won it,” reflects Johnson. “She stumbled out of the gate, gathered herself up and then about the quarter pole she dropped down from about the eight-path to the rail and ran erratic through the lane.” 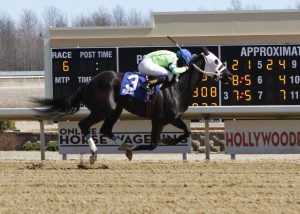 Paolucci and Johnson had their eye on the year-end big prize – the $150,000 John W. Galbreath on The Best of Ohio card. To get Totally Obsessed experience around two turns they found an open allowance race at a mile versus males at Thistledown three weeks prior to the Galbreath. She kept within a length of the leader for 6 panels and faded to fourth. “We put blinkers on her for the Galbreath, but let’s face it – it was Drillit’s day and she romped over twelve other fillies by 16 ½ lengths, while we finished a solid second.” That win stamped Drillit as the state’s Champion 2-year-old Filly. Totally Obsessed left Johnson’s barn a few day later for her two uneventful starts against open company out of state.

In her first start she caught a sloppy track and was squeezed at the start and she tried the turf for the first time in her second. “Oddly enough, it may have been a blessing and a big advantage as she returned more mature. I just freshened her up and now I think she has really got it together,” said Johnson. Totally Obsessed was “much the best” in her 2019 debut in a $31,300 allowance 6-furlong race and followed that by getting up in the final strides in a 5 ½ furlong, $38,000 allowance test over stakes-placed Candy Lane and her juvenile rival champion Drillit.
“She was so fit from those two starts, all I did was jog her one time leading up to the Southern Park,” said the six-time leading trainer at Thistledown. “She walks into the paddock now and she is gorgeous, she is the real deal and a standout, very professional, no longer a 2-year-old learning the game.” Her major adversary, Drillit, was also parading in the paddock and the betting public made Totally Obsessed the slight choice.

When the gates flew open at Mahoning Valley – so did Totally Obsessed. Jockey Luis Quinones got her in a fluid and controlled stride, was briefly challenged by Candy Lane and Totally Obsessed increased her lead in cruise control at every point of call while drawing off under a hand ride by 3 ¼ lengths. Pearls in Charge was a clear second by 3 ¼ lengths as Dolly Dear caught Drillit by a nose for the third spot. “I’m blessed to be training for Ron (Paolucci) he gives me good horses and leaves the rest up to me.” Johnson, who returned to training two years ago, after several years of success in national handicapping competition, doesn’t take all the credit. “Without a doubt I have the best help on this circuit. I couldn’t do it without them.”

Totally Obsessed is a 3-year-old daughter of Tale of Ekati out of Dark Obsession by Grand Slam. Bred by Schleprock Racing LLC she was purchased as a 2-year-old at the Ocala Sale for $50,000.

Congratulations to O.T.B.O. member Ron Paolucci who at the end of 2018 was listed among the winningest owners in North America. His bright Lime Green silks finished first across the finish line an amazing 215 times last season! His runners went to post 917 times and had a record of 215-142-103 while amassing earnings of $4,418,484.

Racing mostly in his home state of Ohio, he is active in private purchases and Loooch Racing Stables competes on many of the major circuits, employing a variety of trainers.

The Ohio Thoroughbred Breeders & Owners would like to recognize the individuals who have given additional support to our organization by becoming “Gold Members” when they renew their annual registration. It is encouraging to know they are willing to give a little more to promote the interests of owning, breeding and racing in Ohio.

We are a not-for-profit entity that serves as a foundation to takes measures to benefit Ohio by informing potential investors of the advantages of participation the thoroughbred industry inside of our borders. We are currently publishing sixteen annual newsletters as part of our effort to shine a light on the successes of the participants in the state. The O.T.B.O. also publishes the statewide stakes brochure and press releases concerning current events in Ohio.

A major service we provide is organizing the Ohio Thoroughbred Fall Mixed Sale. It is a large task that involves many levels of involvement and coordination. Most importantly, the sale provides a venue for Ohioans to sell and purchase state-bred horses that will eventually take part in the growing Ohio Fund program – both in purses and breeder’s awards.

THANK YOU FOR YOUR GENEROSITY
Editors note: this list was compiled in mid-membership drive, please forgive any omissions. 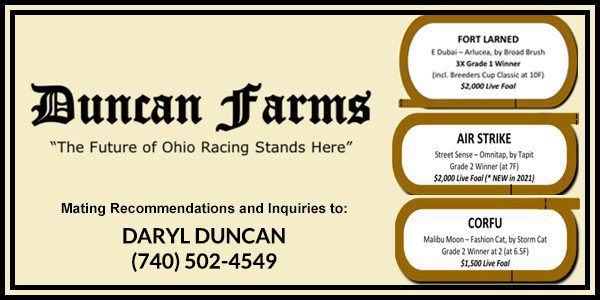