The stars aligned in the sky and on the track at Mahoning Valley Race Course for the Best of Ohio. Odds are against 70-degree weather in that part of the state on October 29, but Mother Nature uncharacteristically brought a warm steady breeze and sunshine throughout the afternoon. It was a coming out party for two Juveniles who put in dominating performances in their divisions, while the races for older horses were all decided in dramatic fashion.  The day provided bettors with full fields in almost every race and had the 2nd highest total purses nationally, behind only Belmont Park. The off-track handicappers responded in kind by putting $787,357 through the windows on the totally Ohio-bred program. 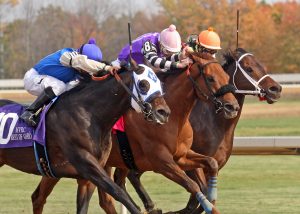 The Best of Ohio series was kicked off with the Sprint, that was won for the third consecutive year by Rivers Run Deep #10. Sent away as the 4 to 5 favorite, it was no walkover as he was part of three-horse photo at the wire. (Rivers Run Deep outside Justalittlesmoke & Candy Bites). He had two strikes against him coming into the race. One of his rare off-the-board finishes took place in his only previous start at Mahoning and he drew the outside post in a field of ten.   “There was some pretty good speed inside of me and they kept me parked outside all the way around,” said jockey Albin Jimenez who had won three of the last four races on the son of Ready’s Image. “None of the leaders backed up, but this horse has a big heart and he showed it when we needed it late in the race.” Rivers Run Deep ran the 6 furlongs in 1:11.75 for owners James and Ywachetta Driver and trainer Chris Hartman. Bred by Nancy Lavrich and Walmac Farm the win pushed the 5-year-olds earning to $860,140. 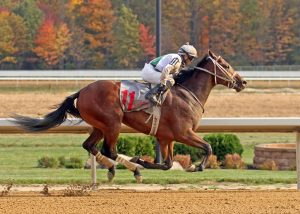 The first of the 2-year-old races rewarded an Ohio breeder of 29 years his first stakes winner. Only 3 of the 14 in the field had ever raced around two turns and only one had won. That horse was the Tom Drury-trained Strike Your Light who upset a field going a mile on the turf at Churchill Downs in early October. Drury won the Best of Ohio Juvenile, but with his other starter Tough It Up #11 for the same owner/breeder Steve Belford and his Maccabee Farm. Jockey John McKee, who had been aboard the son of Champion Lemon Drop Kid for all three of his starts painted the picture. “Tommy and I knew there would be a lot of speed in there, he’s got a big long stride and we knew he’d get the distance so I just let him get comfortable early and got far out of it.” They were 9th at the halfway mark but being confidently ridden, “Coming up the backside he picked up the bridle and we were picking up horses and I saw a seam along the rail and we took it. Turning for home we just hit another gear and he just kept going with it.” Tough It Up covered the 1 1/16 distance in a comfortable 1:49 by 1 ½ lengths over 26-1 shot Mister Peppers and Drury’s other entrant Strike Your Light. Longtime supporter of the Ohio Program Steve Belford celebrated with family and friends in the winner’s circle. “We’ve placed in many stakes, even graded stakes, but have never won one, the feeling is incredible. What’s the secret now? That guy right there – Tom Drury, he’s the secret.” 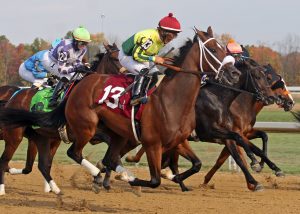 The John W. Galbraith for the 2-year-fillies unveiled another young Ohio-bred with excellent breeding and apparently, a lot of talent as a route runner. Owned and bred by Tommy Ligon, Someday Soon #13 a daughter of Proud Citizen broke her maiden at first call by 8 ½ lengths followed by a very troubled trip in the Miss Ohio Stakes. She ran out of ground in a close second in the six panel Tah Dah Stakes and entered the Galbraith off an open company runner up effort going 5 ½ furlongs. She drew the unlucky outside post 13 in the Best of Ohio and lost more ground when the gates opened. “She came out of the gate a little rank and broke a bit to the outside,” stated rider Walter De La Cruz. “After that it was easy I had so much horse we were with the leaders and when I asked her it was like ‘Poof’ – she just went to the front.” Trainer William Van Meter is new to the Ohio Program as Someday Soon is his first and only Ohio-bred. “We may get some more now. A client of mine who is absolutely a wonderful person, horseman and horse breeder Tommy Ligon had us come out to the farm and we picked two horses as yearlings and she was one of them.” Van Meter never had a doubt about her ability to get the distance. “The whole time we thought she was a route horse, but sprints were all the races they were writing for. Hopefully next year we will get more opportunity to run her long.” Someday Soon covered the 1 1/16 miles in 1:48.13, 20-1 Mizz Quoted battled for the lead and finished second just ahead of Ali Blue.

The Best of Ohio Distaff was set up for a crowning of last season’s 2-year-old champion School Board Prez who was undefeated this season in her three Ohio stakes appearances – the Tomboy, Queen City Oaks and Vivacious all of which were at the Distaff distance of 1 1/16, while two of those were on the turf. This would be the first start at Mahoning Valley for the John Royer homebred, but her body of work rightfully so landed her as the 2-1 favorite. You never know when a horse has a headache and it was not to be her day as for most of the race she lagged far behind the field of 12. 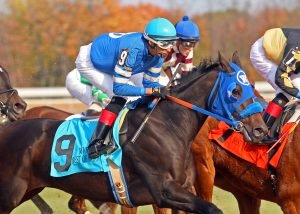 That opened the door for 3-year-old Ohio Gold #9 to record her first stakes victory on Ohio’s biggest stage. Well placed in Ohio allowance races and a solid optional claiming race prior to the Distaff, the Sandra Marie Adkins trainee had already amassed $118,105 without ever facing stakes competition. Placed forwardly from the start by regular rider Christian Pilares, they circled the field 4-wide into the stretch and the race was on to catch 40 -1 shot Star Mabee who slowed the pace down with a half-mile time of 51.3. It was a two-horse race to the finish. Jockey Pilares did a little bit of handicapping coming into the race as he had the option to ride 6-1 shot Tune Up and choose 12-1 Ohio Gold. “I was pretty confident of her; she’s been training good and the last race she won gave me more confidence and she is bred to go long.” Ohio Gold covered the 1 1/16 miles in 1:54.59 for owner Charlie Williams LLC. The daughter of Wilburn was bred by Michael Evans II, Travis Evans and Sheltowee Farm.

The Buckeye-Bred Breeders’ Cup ended with a barn burner! Ron Paolucci’s Mo Dont No #8 looked like a lock in the 1 ¼ mile Ohio Endurance, but for $150,000 there is a reason why twelve horses loaded into the starting gate. Trainer Tim Hamm had run 3rd to “Mo” twice during the season while rating off the pace a bit with Bucket Beat #5. He went to a new game plan and had rider Irwin Rosendo move early and they took over after 6 furlongs. It appeared that jockey Luis Colon aboard Mo Dont No was going to blow by the leader in the lane, but Bucket Beat found another gear. In perhaps the best race of the season, these two refused to relinquish the lead and it was a challenge of matching strides and head bobs 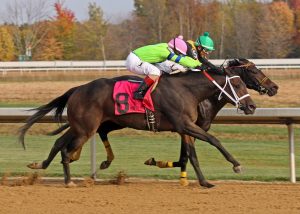 to the wire
through the final furlong. After examination of the photo it was Mo Dont No by a nose in the 1 ¼ mile battle that was settled in 2:08.53. That thrilling win pushed his career earnings to $284,255. It also placed the 3-year-old as the frontrunner for Ohio Horse of the Year honors. The gelded son of Uncle Mo was bred by Beechwood Racing Stable and was purchased at the Keeneland 2014 Sale for $50,000. Jeff Radosevich trains the Endurance victor whose only off-the-board finish this season came in the Ohio Derby. “Everyone should have one of him, he’s like a big old pony horse. He doesn’t turn a hair over anything, he just doesn’t care.” Asked if this was “Mo’s” final appearance of the season Jeff replied, “No, no – I have something in line for him, but I’m not telling you though,” he laughed. Ohio race fans will be watching and waiting as he put on quite a gritty show on Best of Ohio day.

The near miss in the $150,000 Best of Ohio Endurance was doubly tough for trainer Tim Hamm. Had his Bucket Beat won the photo finish it would have been his 1,000 victory as a thoroughbred trainer, a rare accomplishment. Showing class over disappointment he watched the replay, shrugged and said, “Sometimes you get the nod and sometimes you give it.”

Chris McErlean, the Vice President of Racing for Penn National Gaming did an outstanding hands-on job overseeing the events of the day. The activities flowed smoothly and no detail overlooked – right down to personalized saddle towels for the Best of Ohio races. When McErlean discovered the O.T.B.O. budget would not allow for an owners’ event he arranged for the track to present a buffet for the participants.  According to Joe DiVivo of the Daily Racing form, this year’s series showed an increase of $225,000 in handle over the 2015 Best of Ohio.