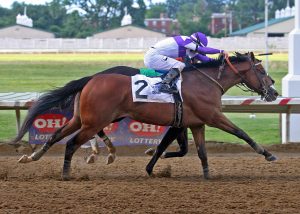 Ohio Derby Day was a perfect one at Jack Thistledown with blue skies, comfortable temperature and a three-stakes race card that drew a sizeable crowd. There were food trucks, a bouncy house for children and a jockey autograph table next to a “Alex’s Lemonade Stand,” a foundation for childhood cancer.
The Derby itself has once again been awarded a graded stakes race status and it drew four horses that ran in the crowded Kentucky Derby – all of them sporting trouble lines in their past performances. The race also drew the talents of nationally recognized jockeys Mike Smith, Julien Leparoux and Kent Desormeaux. O.T.B.O. members were well represented in the nine-horse field with Loooch Racing Stables sending a three-horse entry to the gate with Game Over, Vibe and Talk Less, while Maccabee Farm sent their three-time homebred winner Hinton to post in the $500,000 test.
Fast and Accurate, winner of the Grade 3 Spiral Stakes, set the pace in the 1 1/8 race. Hall of Fame jockey Mike Smith astride Grade 2 Louisiana Derby winner Girvin was content to lay second until the final turn. He wrested the lead at the head of the lane and then repelled a strong challenge from Game Over. Odds-on Girvin had a 1 ½ lead with a furlong left to run, but Grade 2 Blue Grass winner Irap continued his momentum from mid-pack to draw on even terms in the final yards. The top two hit the wire in tandem and after the photo finish was examined it was Irap taking the top spot. Kentucky Derby contender Untrapped took third.
“He broke good and we had a good position,” said Leparoux. “I was a little farther back in the first turn, but I was right behind Girvin and I knew that was the right horse to follow. He has that long, long stride, so I was able to get him going early and got there on time. I didn’t know that I had won, it was so close.
The half-brother to champion Speitstown ran the 1 1/8 in 1:50.48. Owned by Reddam Racing and trained by Doug O’Neil, they have indicated that Irap may make another appearance in the Midwest with a potential start in the Indiana Derby on July 15.

LEONA’S REWARD DUCKS “SMOKE” AND LIGHTS UP THE GEORGE LEWIS
Trainer Tim Hamm co-entered Leona’s Reward in the J. William Petro Memorial Handicap and George Lewis Memorial Stakes. Both are $75,000 races for three years old and up, only the Petro is restricted to fillies and mares and the George Lewis is for Accredited Ohio-breds. He opted to take on the boys with his 4-year-old filly rather than match strides with 14-time winner Justalittlesmoke. 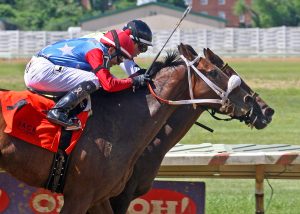 That set up a match between last year’s leading accredited-breds with Leona’s Reward taking on her male counterpart Eightthehardway. That being said, the apparent horse to beat was Ruberto Racing Stable’s Buckeye Bullet. He came into the George Lewis a perfect 4 for 4 in 2017 including a win in the recent Mackey/Rowland Memorial that pushed his seasonal earnings to $100,320. The betting public backed him down to odds of 3 to 5.
All of Buckeye Bullet’s wins had come in sprints and the 4-year-old gelding was on top after 6 furlongs while setting moderate fractions, but there were 3 furlongs left to run and Leona’s Reward, an accomplished router, ranged alongside him at that point. They matched strides around the turn and just as Leona’s Reward got past the pacesetter she was engaged stoutly by Eightthehardway. Those two engaged in a furious final furlong with heads bobbing as they crossed the finish line. The possibility of a dead-heat was bantered about as the horses circled awaiting the decision of the placing judges. The tote board finally lit up. It was Leona’s Reward’s nostril in front on the photo. Buckeye Bullet retained the third spot 3 ¾ lengths behind the top two.
“I talked to Mr. Tim (Hamm) this morning and he told me to take her back,” said jockey Pablo Morales. “She was happy the whole way, I just tried to keep quiet and stay off the lead. I had so much horse and we couldn’t wait anymore. At the wire, I thought it was us or a dead-heat.” Bred by Blazing Meadows Farm and owned by Michael Friedman and Blazing Meadows the daughter of Parent’s Reward ran the 1 1/8 miles in 1:54.82 and pushed her career earnings to $255,546.

JUSTALITTLESMOKE REPEATS IN J. WM. PETRO MEMORIAL
Trainer Robert Gorham is a man with a plan where Justalittlesmoke is concerned. He took the exact same path to victory in this year’s edition of the $75,000 J. Wm. Petro Memorial Handicap. The formula begins with a start in an optional claiming race as a prep leading to a win in the Angenora Stakes at Jack Thistledown. Now 5-years-old, the Champion Handicap Mare of 2016 seems to be getting better with age as she won the 2017 Angenora 1 1/5 seconds faster than the year before. 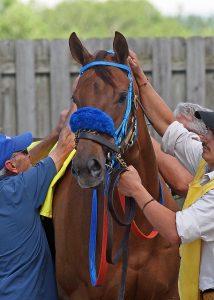 Known primarily as a sprinter, 12 of her 15 wins came at distances shorter than the 1 1/16 mile Petro, she took back and stalked the pace in both of her wins in this race, and this year finished a full second faster than the previous year. “She’s better this year than she was last year.” Stated regular rider T. D. Houghton. “Everything about her is better, she’s more relaxed this year, when we were warming up in the post parade she didn’t turn a hair, she’s just really sharp all the time.”
Proper Discretion, a winner of $216,100, was recently acquired by Loooch Racing Stables and the riding instructions for Ricardo Feliciano were obvious from the start – play “Catch me if you can.” At the half-mile marker, they were on top by 8 lengths in :46 1/5. Houghton sat chilly and didn’t make his move until they turned for home. “She was just pulling, pulling, pulling. But at the top of the lane is where she really she really lays it down, once I got by Ricky I thought there better be a horse flying really good if they are going to catch me because she just kept striding out really, really good.”
Mast Thoroughbred’s homebred Justalittlesmoke came home 7 ¾ lengths on top as the 3 to 5 favorite. School Board Prez rallied from next to last to catch La Nina Bronca for the second spot. The Derby Day win pushed Justalittlesmoke’s career earnings to $722,870.