Alexandria is a chestnut filly by red-hot sire Constitution out of Spring Water by Spring At Last and was bred by the partnership of Blazing Meadows Farm LLC and WinStar Farm LLC.  She is owner by the same duo and Michael Lewis.  Trainer Tim Hamm was impressed with her performance.  “Charlie Williams horse was right there and she ran an awesome race, but my filly was up to the task.”  Hamm then pulled out his phone and ran a video of Alexandria after she passed the wire, “Check this out, now this is a good gallop out!”  The chestnut was not tiring, and as track announcer Ed Meyer said at the wire in a homage to the late announcer, Kevin Goemmer, was “showing her heels to the field!”

BACK IN OHIO – DISTINCTIVE FLOWER BLOOMS ON THE GRASS IN $75,000 VIVACIOUS STAKES

Some horses just have a natural penchant for the lead in a race and the ability to get it.  Ohio-bred Distinctive Flower is one of those and she put it on display in the grassy 1 1/16 mile Vivacious Handicap.  Drillit, coming off a 12 length romp in the J.W. Petro Memorial at Thistledown was made the morning line favorite and assigned highweight of 124 lbs., while the fleet footed Distinctive Flower was installed as the second choice toting 116 lbs. in the Belterra Park co-feature that hot afternoon. 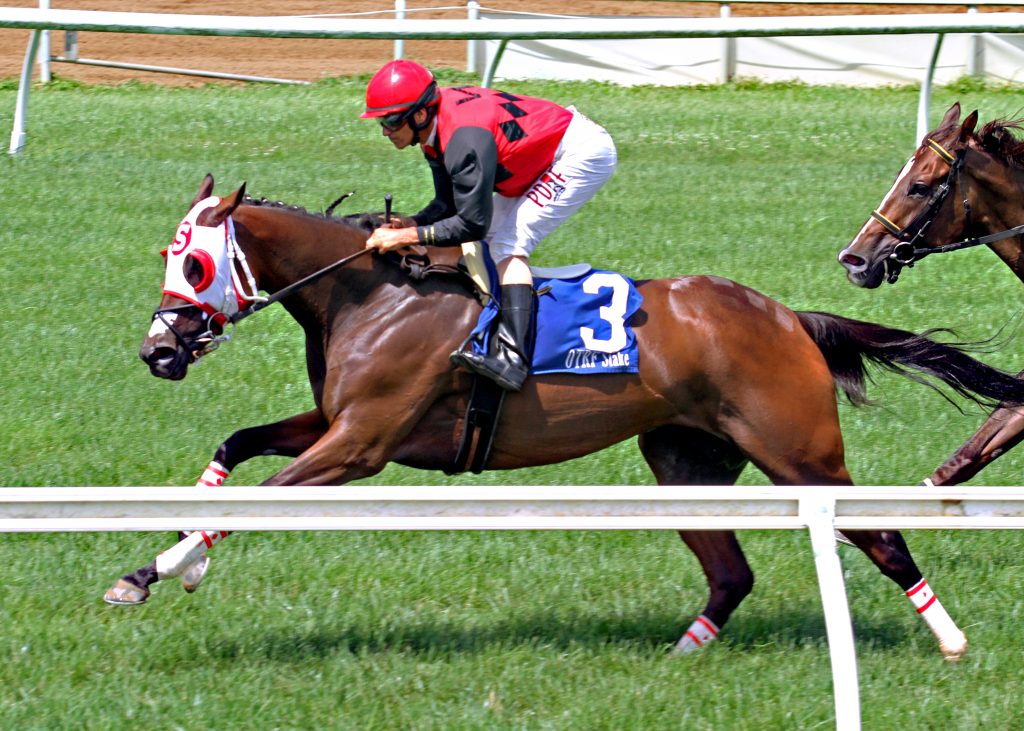 When the ten registered Buckeye-breds left the gate, Distinctive Flower appeared to effortlessly stride to the lead, while Drillit didn’t take to her turf debut comfortably and ran behind over half the field rather than being poised in her usual close up stalking style.  Multiple Ohio Champion mare Leona’s Reward took up the role of pace presser, it is hard to believe that in her pursuit of the $1 mark, he 7-year-old had never won a race on turf, or at Belterra Park for that matter.

As they rounded the “Coney Island Curve” and into the backstretch alongside the Ohio River, jockey Rafael Mojica, Jr., just let Distinctive Flower stride out on her own while building a 7-length lead.  Turning into the stretch the margin diminished to 3 lengths over Leona’s Reward after travelling a brisk 1: 10.45 time for the first six panels, but she maintained her momentum to win by 1 1/3 lenghts to a fast closing Birdacious who won this race last year.  Leona’s Reward was only ½ length behind for the third spot.  The final time was 1:42.96.

It was a crowded winners circle for the partnership of Mark Kuntz LLC, Easy Money LLC and Michael Luebbe – always a good sign of new potential owners.  At the mare’s hip was leading Belterra Park trainer Larry Smith who said, “She came to me up from Tampa in great shape and adapted well after competing in nine straight races in Pennsylvania and Florida.  She was running against tough, mostly $32,000 Allowance optional claiming company and always hitting the board and always on the lead.  She’s a horse that had to be on the front and what she did today, she did all on her own.”  Jockey Mojica concurred, “She was just galloping along, and I saw no reason to fight her.”

The 5-year-old daughter of Flower Alley out of Real Distinctive by With Distinction was bred by Lowell Allen and John Bourke and was claimed off them in August of 2019 at Presque Isle for $27,500.  She was claimed by her new partnership group for $32,000 at Tampa Bay Downs and with her win in the Vivacious pushed her career earnings to $174,762.