OHIO’S 2017 STAKES SEASON CONCLUDES AT MAHONING VALLEY
While the annual $750,000 Best of Ohio Series draws center attention on the stakes calendar each year, it is not the end of stakes competition in the Buckeye State. There are five more $75,000 stakes on the schedule and this year they all took place at Mahoning Valley.

SOUTHERN MISCHIEF ALL BUSINESS IN $75,000 FIRST LADY
It looks like the state’s leading owner, Ron Paolucci, has pulled another rabbit out of his hat (and I don’t mean one to soften up the speed in a race)! Bred by Greg Justice and Justice Farm the daughter of Into Mischief out of Traditionalist by Aptitude was sold for $100,000 at the 2016 Ocala Breeders Sale. Sent to the barn of Bob Baffert, she failed to break her maiden in five starts at Santa Anita with her last start in a $75,000 claiming event. Enter Loooch Racing Stables who turned her training over to Jeff Radosevich and immediately broke her maiden for $30,000 at JACK Thistledown, eventually running her through her conditions with two more wins prior to the First Lady. 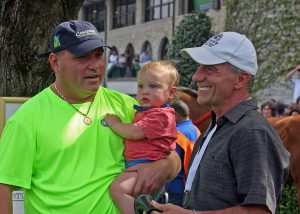 Southern Mischief was sent away as the favorite in her stakes debut, and pulled no tricks on her supporters, cruising to a 4 1/2-length score for Ohio-bred 3-year-olds. Blanconia stumbled at the start of the First Lady, but quickly recovered and led by a length through the opening quarter in 23.57 seconds. Meanwhile, Southern Mischief was away unhurried under Luis Colon, and circled the field under her own power to pull up alongside Blanconia’s flank, a half-length behind through the half in 47.36. She gained the lead by upper stretch, and the outcome was never in doubt from there. The final time for the six furlongs was 1:12.73.
Blanconia, who had been first or second in her last seven starts, was second, 5 3/4 lengths clear of the rest of the field. Classical Music edged Sprinkle Time by a neck to round out the trifecta. Southern Mischeif is now undefeated in Ohio and has career earnings of $115,210.

EIGHTTHEHARDWAY GETS BACK TO WINNING WAYS
WITH A REPEAT IN THE RUFF/KIRCHBERG MEMORIAL
O.T.B.O. owner Paul Groves is relieved that defending winner Eightthehardway got back on track as he splashed home for a repeat victory in the $75,000 Ruff/Kirchberg Memorial Handicap for Ohio-accredited older horses Saturday, November 18 at Mahoning Valley. “We’ve been plagued with bad luck all year,” said Groves. “We lost by a dirty nose in the George Lewis Memorial after having to be checked in the race. Then ran second and third to Ohio Horse of the Year Mo Dont No.” 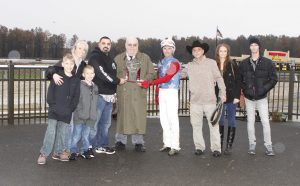 “We drew inside in most of our races and that is not the position he prefers to be,” Groves continued. “We decided to put T.D. Houghton up on him, he is such a veteran, saw what he needed and did exactly what he needed to do.” Eightthehardway was fourth and three lengths back, racing toward the inside while 2015 Ruff/Kirchberg Memorial winner Geppetto took the field through a credible 48.55 second half on the sloppy track. Houghton angled Eightthehardway outside and clear for running room around the far turn and the gelding caught a stubborn but fading Geppetto in upper stretch and pulled clear in the final stages to win by 4 1/4 lengths. The final time for the 1 1/8 miles was 1:54.28. Daggers Duel rallied to edge Geppetto by three-quarters of a length for second.
Bred by Blazing Meadows Farm and trained by Richard Vickers, the son of Ohio stallion Parent’s Reward pushed his career earnings to $356,723. “We are shopping for another spot for him,” stated Groves of the 2016 Accredited Male Champion. “He’s going so strong right now we had to hire a new rider just to gallop him. He’s grown now and will be better as a 6-year-old than he ever was.”

EQUINE FAMILY AFFAIR IN THE GLACIAL PRINCESS STAKES
Earlier on the card, favored No Truer rolled to a six-length victory in the $75,000 Glacial Princess Stakes for Ohio-accredited 2-year-old fillies in her second lifetime start. The victory came one year after her full sister True Cinder won the same race for owner and trainer Michael Rone. Big sister has now bankrolled $289,300 and this family has a bright future under his tutelage.
No Truer, who finished third in the Emerald Necklace Stakes in her career debut, and True Cinder, who is a four-time stakes winner, are both by Alcindor, out of the unraced Shakespeare mare Be True. They were both bred by the late Larry Beyer. 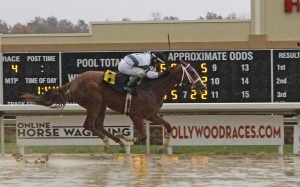 No Truer and Irwin Rosendo were never far off as they stalked the pace in second, and were just a head behind leader Linda N Michelle at the quarter pole. No Truer drifted out to the eight-path in the stretch and extended her margin steadily to be much the best at the wire, finishing the six furlongs in 1:14.22, six lengths in front.
Linda N Michelle was a clear second, 5 1/4 lengths ahead of Silky Tassels. In her second start No Truer now has $52,500 to her credit. “She was probably a work away from being at her best in her first start in the Emerald Necklace and ended up finishing third,” stated Mike Rone. “She’s has similarities to her sister. They are very kind, but have a hotspot in them. True Cinder was able to stretch out when she turned three and I see no reason why this filly won’t.”
The entire family will take the winter off and Rone is looking towards next season when the family expands at the races next year. “The two fillies are outside standing together in the field right now and over in the barn is their full brother who will turn two. He is broke and ready. I am truly blessed.”

TRUE FAMILY AFFAIR IN THE JOSHUA RADOSEVICH MEMORIAL STAKES
The name Radosevich has been a very familiar one to anyone in the racing game in the Midwest. There are generations of trainers, exercise riders and jockeys in their bloodlines and you can add an Eclipse Award winning photographer to the family tree. It was only fitting that trainer Jeff Radosevich won the race named in honor of his nephew Joshua, a young rising star as an apprentice in the saddle who perished in a breakdown at Beulah Park. 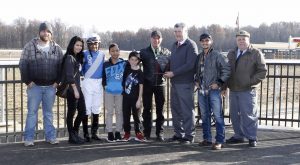 It was all smiles in the winner’s circle after Mobil Solution crossed the finish line by 2 ¾ lengths in the $75,000 Joshua Radosevich Memorial. Under the guidance of Luis Rivera, the 2-year-old gelding pressed the pace to the half-mile and drew away in 1:15.04. Midnight Mikey winner of the Loyalty Stakes at Belterra Park finished second over Freekson. Mobil Solution was bred by Mapleton Farm where his sire Mobil stands, and is owned by Gerald Silver. Mobil Solution finished third in the Loyalty Stakes when still a maiden. With six starts on his resume he now has $75,290 in earnings.

LEONA’S REWARD REPEATS IN THE $75,000 BOBBY BRICKER MEMORIAL
She was crowned as the leading Accredited Ohio-bred Filly on 2016 and her on-track performances this season should insure a repeat of that title. Leona’s Reward, a 4-year-old filly by Parent’s Reward bred by Blazing Meadows Farm, closed out the stakes season with an authoritative 14 length romp in the $75,000 Bobby Bricker Memorial. She won this race last season in wire to wire fashion.
One of the most consistent horses she’s been referred to as a ATM machine with hooves. “You couldn’t say that better,” laughed breeder and co-owner Tim Hamm, who owns her in partnership with Michael Friedman. “We call her our money tree. Michael came to me looking for some horses and I suggested Bling It On Again, who was a no brainer and turned out to be a nice horse. I suggested he get an accredited-bred and we landed on Leona’s Reward. Her first few starts were not that good, but she is huge, probably 17 hands now. I told him not to give up on her and she progressively developed. She was lanky and I did not want to tear her up, so we gave her time.” 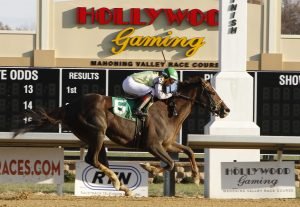 Their patience has paid off with career earnings of $424,356 from 28 lifetime starts. In 2017 she recorded four stakes victories. Perhaps her most impressive win came on Ohio Derby Day when she took on her male counterparts in the George Lewis and gamely lasted by a nose over Eightthehardway. “There was a filly race that day,” recalled Hamm. “But after evaluating both we thought our odds were better against the boys. If you pick your spots and place them well you can make some money. We map out a plan every year and she’s down here turned out in Ocala. The big girl will be back next season in Ohio.”
In the Bricker, Leona’s Reward prompted the pace of sprinter Blanconia who was trying 1 1/16 miles for the first time and after catching her after a half-mile, jockey Pablo Morales took control of the race and gave her a hand ride to her margin of victory over True Cinder, who was 10 ¾ lengths the better of Grizabella. Final time was 1:48.55.