FOR OTBO SALE INFORMATION – CLICK ON LINK ON THIS MASTHEAD

NIKKI MY DARLING IMPRESSIVE WINNER IN $75,000 PAY THE MAN STAKES

When the distance of the Pay The Man Stakes at JACK Thistledown was shortened to 1 1/16 miles, more than one owner stated, “Well it looks like Justalittlesmoke will be getting another trophy.” The 5-year-old mare had a record of 4-3-1-0 at the distance for earnings of $195,000, while 10 of her 15 lifetime victories have taken place over that racing oval – those were plenty of reasons to like her chances. But they don’t hand out the hardware before the race, there is a reason they put them in the gate.

Anyone who has watched the evolution of Loooch Racing Stables (yes, three ooo’s in the name) over recent years has seen that owner Ron Paolucci does not back down from a challenge and knows where to place his runners, whether in a graded stakes race or a $5,000 claiming event. He entered three in the Pay The Man and eventually scratched recent authoritative $75,000 Vivacious Stakes winner Mayas Queen Neetee.

When the gates sprung open, Luis Colon put the 3-year-old Nikki My Darling on the lead as he did in her recent win in the 1 1/8 $75,000 Norm Barron Queen City Oaks. Justaliitlesmoke, the 3/5 favorite, chased in second but by the 6-furlong marker the field made track announcer Matt Hook’s job an easy one – running 1-2-3-4-5-6-7 for the rest of the race. Under a hand ride “Nikki” hit the wire by 8 lengths over her elders in front of the favorite in 1:43.82 with 28-1 longshot Star Mabee grabbing the third spot.

“She’s a nice filly,” said trainer Jeff Radosevich. “What makes her good is, she’s smart. And anytime they’re smart they can go further.” Asked if he were intimidated by facing Ohio multi-champion Justalittlesmoke, Radosevich chuckled and said, “Oh, yeah, always. She didn’t make three-quarters of a million (dollars) by not running good. You’re always a little scared of horses that good.”

By Creative Cause out of the Zamindar mare Zamindarling, Nikki My Darling is owned by Loooch Racing Stables and Imaginary Stables. She was bred by Sheltowee Farm and James Evan and was purchased for $100,000 at the Ocala Breedes Sale for 2-year-olds in March of 2016. Her record stands now at six wins and one second in 11 starts for earnings of $226,533.

GALLOPING OUT: Mayas Queen Neetee got her payday 48 hours later. Facing open company as the 1-9 favorite in a 1 mile 40 yard allowance race at Thistledown. Jockey Luis Colon put her on an effortless lead early, allowed challenger Riproaring to come within a length around the turn and then encouraged her through the lane to pull away by 5 lengths. In what amounted to a paid public workout, and with the Ohio Fund Bonus, the daughter of Speightstown out of The Niagara Queen who was bred by Anstu Farm LLC, pushed her career earnings to $132,792 in her 10th lifetime start.  (Photo courtesy of J.J. Zamaiko)

OHIO CHAMPION RIVERS RUN DEEP JOINS THE MILLIONAIRES CLUB
IN HIS 37TH START
At the racetrack, they say “There is no such thing, as a sure thing.” That is a declaration that does not apply to Ohio’s three-time Sprint Champion Rivers Run Deep when he loads into the gate for JACK Thistledown’s Honey Jay Stakes. He recently recorded his fourth consecutive victory in the $75,000 event, though it wasn’t without momentary cause for concern.

When the gates opened Alliseeisgold , who has an affinity for the Thistledown surface with six of his seven lifetime wins there, shot from the 5 hole and was followed by Bootsonthebeach and Bootlegger all of those outside runners left nothing but a trap for Rivers Run Deep to run up into. Rivers Run Deep had the inside post after a scratch.

Jockey Eduardo Perez was forced to snatch up his powerful 1 to 5 shot and as the horses fanned out on the turn he shifted out three wide when clear, made the lead mid-stretch and drew off to win by a safe 2 ¼ lengths. He covered the six panels in 1:10.82. Rivers Run Deep pushed his career earnings to $1,008,805 with his 14th career stakes victory. He has won the Best of Ohio Sprint Stakes three straight times and is expected at Belterra Park on October 7 to make it four.

“The only time he was beat [at Thistledown] he was run into the rail, so I’m always concerned when he’s tight down inside,” trainer Chris Hartman said. “But once he gets to doing his thing, he just gets it done. He’s a virtual ATM machine. He knows his job and he does it well.” Alliseeisgold held second by a head over a rallying Hijo de Sheltowee. The third-place finisher was 6 3/4 lengths clear of a fading Bootsonthebeach. The 6-year-old son of Ready’s Image is owned by O.T.B.O. members James and Ywachetta Driver.

TRUE CINDER MAKES IT SEVEN IN A ROW WITH WIN
IN $75,000 HORIZON STAKES

It looks like owner/trainer Mike Rone has True Cinder developing quite nicely as she grows into her 3-year old frame. Well enough to girl-handle her male counterparts in the grassy 1 1/16 mile Horizon Stakes at Belterra Park on August 13. If you adhere to the long-standing adage that 1/5th of a second equals 1 length, her final time of 1:41.32 was a 20-length improvement off of her recent win against fillies in the Cincinnatian Stakes at the same distance over the same course!
The outcome was never in doubt from the time the gates opened. With Ricardo Feliciano aboard, the daughter of Alcindor rated nicely on the lead and improved her lead at every point of call, drawing away under a hand ride to win impressively by 5 ¾ lengths. It was a Lady’s Day Trifecta as Grizabella (by Lunarpal) rallied from last for the second spot and Sugar Lane (by Bold Truth) held on for the third spot in this Ohio Accredited race.
True Cinder is undefeated in 2017 and has not lost since she broke her maiden by 12 lengths in November of last year. She had only sprinted prior to the Cincinnatian and has now proven that she can beat open company, male rivals, likes dirt and turf and has no problem stretching out to two turns. It will be interesting to see where Mike Rone intends to place her between now and the Best of Ohio and which race he enters her in that afternoon. $251,800 in 10 lifetime starts – that was one smart private purchase from the estate of Larry Beyer.

MAYAS QUEEN NEETEE $75,000 VIVACIOUS WIN KEEPS HER UNDEFEATED IN OHIO
Ron Paolucci seems to have an uncanny knack for private purchases that turn coal into diamonds. Mayas Queen Neetee was unsuccessfully racing on the New York and Florida circuits when it appears she came into his possession after a last-place finish at Gulfstream Park. Since being transferred to the barn of Jeff Radosevich and moved to Ohio she is a perfect 4 for 4. 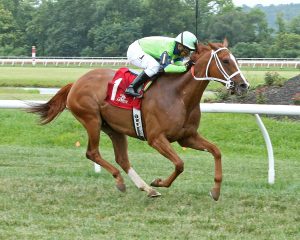 After breaking her maiden and running through her conditions in impressive style while stretching out in every start at Thistledown, she boasted Daily Racing Form running lines that stated – “Closed with a rush; late burst 4 path, clear and much the best, ridden out.” The $75,000 Vivacious would see her return to turf, a surface on which she was unsuccessful in her first three career starts. Mayas Queen Neetee was installed a slight favorite over School Board Prez, who won the race last year.
Oddly, after the break of the 1 1/16 test, it was Floral Sky, another Loooch fluorescent green colorbearer, who set the pace with Mayas Queen Neetee nearby clocking 6 furlongs in 1:11.43. After their head to head match into the stretch, Luis Colon smooched to “Maya” and she drew clear by 3 lengths. School Board Prez rallied through traffic in the stretch for the second spot by a head over Moms Genes, who set the track-record last year.
The 5-year-old daughter of Speightstown out of The Niagara Queen by Langfuhr was bred by Anstu Farm LLC and her four-race skein in Ohio pushed her nine race earnings to $110,192. Surely the $150,000 Best of Ohio Distaff will be on her radar October 7.