HEAT WAVE CANCELLS BUCKEYE NATIVE AND NORM BARRON QUEEN CITY OAKS
VALLEY OF MO’ARA BURNS THE FIELD IN THE MISS OHIO
ALTISSIMO CONTINUES HIS HOT STREAK
The late July “Heat Dome” that covered a third of the U.S. necessitated cancellations of over a half-dozen tracks over the weekend. The Buckeye Native and Norm Barron Queen City Oaks were not run as Belterra Park held no live racing that weekend. Pending approval, it is hoped that both races can be moved to the 27th and 28th. The good news is the fact that there are no stakes that following weekend and the stakes scheduled for the first weekend in August are run for different conditions and divisions.

The heat wasn’t as intense to the North at JACK Thistledown and the $75,000 Miss Ohio for 2-year-old fillies was run as scheduled. As legendary track announcer Kevin Goemmer used to exclaim, “…the race is for PLACE!” Another “Goemmerism” came into play for the Miss Ohio winner Valley of Mo’ara who “…went from flag fall, to that’s all!”

The chestnut filly trained by O.T.B.O. President Emeritus Tim Hamm, broke from the gate quickly under Scott Speith and in workwomen-like fashion the odds-on favorite increased her lead at every point of call. Valley of Mo’ara dispersed two challenges and drew away by 4 lengths in 1:06.46 in the 5 ½ furlong sprint. In a four-horse photo finish for the second spot was Ohio Mixed Sale graduate Edge of Night catching Calusa Queen who was a neck clear of Moonlight Mission.
The heat never came into play for Valley of Mo’ra. “Surprisingly it was cooler this morning than expected,” said Hamm. “We had clouds and a breeze come in and it blew out the humidity. It’s when it’s hot and humid all day that’s concerns us. She never sweated up.”
Bred by Michael William Soehnien, the Ohio-bred daughter of Overanalyze out of Pola Golden R N was a Keeneland September Sales graduate bringing a final bid of $13,000. “I usually just race horses I’ve bred or in partnership as a breeder,” Hamm stated. “This horse caught my eye and created a new partnership with members of TEC Racing and RTA Family Trust. We thought we might have to go almost twice that price. At this point she is very racy and precocious and about 15.3 hands. We expect she will continue to mature.”
Valley of Mo’ara in three starts has never finished worse than second. She ran second in her debut vs. open company and returned against state breds to break her maiden by 10 lengths prior to the Ohio Miss.

OHIO HORSE OF THE YEAR TAKES HIS SHOW ON THE ROAD
When you’re hot – you’re hot! Although trainer Ricard Zielinski quoted that, “We’ll probably follow last year’s schedule,” after winning the Gendelman Memorial at Belterra Park. He recently changed the timetable and crossed state lines with Ohio HOY Altissimo in the $100,000 Hockessin Stakes at Delaware Park on July 13. 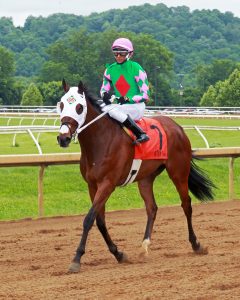 In the words of the DRF chart caller…” ALTIMMISO vied inside Athur’s Hope before giving that one the slip…and widened under mild left-handed urging.” With regular rider Christian Pilares in the saddle, Altissimo cut out brisk early fractions of 21.77 and 44.54 and went on to win by a widening 5 ½ lengths getting the six furlongs in 1:09.31. That impressive performance pushed his career record to 37-16-4-4 for earnings of $624,388.
Altissimo was bred by Nancy Lavrich & Niknar Farm LLC. The six-year-old is owned by Nancy Lavrich and Ronald Zielinski.

OHIO-BRED SELLS FOR $120,000 AT FASIG-TIPTON JULY SALE
A dark Bay or Brown Filly consigned by Sheppell Thoroughbreds for C.J. Thoroughbreds brought a final bid of $120,000 by agent Ben McElroy. The daughter of Darby Dan stallion Dialed In is out of Redheaded Rita by Tale of the Cat. Her female family traces to $1.8 million Breeders’ Cup Ladies’ Classic winner Unrivaled Belle who is the dam of two-time champion Unique Bella a earner of $1,272,400.
Additional Buckeye-breds who went through the ring in Hip number order were: Hip 212 sold for $70,000 to Homepride Farm and was consigned by Sheppell Thoroughbreds as agent. The son of Kantharos is out of Female Drama by Indian Charlie. Female Drama was 2-for-2 as a juvenile including the Wings of Jove Stakes at Belmont Park.
Hip 258 was consigned by Ballysax Bloodstock, Agent and purchased by Owls Bloodstock for $17,000. The son of Sky Kingdom is out of Ivory Treasure by Runaway Groom. He is from the female family of Grade 1 winner Malibu Mint a track-record setter and earner of $723,829.
Hip 271 sold for $55,000 to Michael Foster and is a chestnut son of the promising stallion Palace. Consigned by Michael and Julia O’Quinn, Agent the colt is out of stakes-placed Klondike Kate by Henny Hughes. The family has European roots through the third dam, stakes winner River Jig, the dam of multiple group/graded stakes winner Dance Parade.