Ohio breeders: Steven Chumney and Jim & Jane Fraser take quality Ohio bred foals to the KY sales and were supported by the market.

The first Ohio Bred weanling to sell this fall in KY was Hip No.114 (see the picture below) a Colt by Vino Rosso out of Storm Raven, foaled and raised by Steven Chumney at Smokin C LLC in East Sparta, Ohio. This Colt proved himself to be the highest selling Vino Rosso at the Fasig Tipton Select sale when the hammer dropped for $150,000. Chumney says that this foal was always his favorite and he was honored when Fasig Tipton liked him enough to be invited to sell at the Night of the Stars. Chumney says “I didn’t know what to expect, I just sat back and watched as bids were coming from everywhere. It was an incredible minute that I will never forget. His actions and presence at the sale definitely made me proud.”

Three Ohio Bred weanlings were then sold later in the week at the Keeneland Breeding Stock sale.

Hip No.1143- a Midshipman colt out of Battaleys owned and raised by Steven Chumney sold for $70,000, This Colt drew a lot of attention and had an impressive physical. This sale highlighted the top selling Midshipman weanling at the Keeneland sale.

Hip No. 2352- a Classic Empire colt out of Whitelacenpromises owned and raised by James and Jane Fraser at Pinecrest farm in Cincinnati, Ohio sold for $40,000. Jim and Jane were rewarded when their decision to breed to a newer sire, Classic Empire, emerged as the #4 freshman sire going into the sale.

Hip No. 2597- a Collected filly out of Meadowlee, owned and raised by James and Jane Fraser sold for $37,000. This was a nice strong filly and sold well, making her the second highest selling Collected weanling of the Keeneland sale.

The Fraser’s have been successfully breeding racing stock for over 50 years. Fraser states, “The increases in Ohio purses, the Ohio stakes program, and the generous Ohio breeder awards have made raising thoroughbreds in Ohio a worthwhile and satisfying endeavor for us . Our wish list for continued improvements would be night racing in Ohio and a turf course at Thistledown.”

Chumney, who also sold 2 nice yearlings in KY this year states “as Ohio purses have increased I have continued to invest in Ohio Breds. As long as this continues we can all be successful.”

It is nice to see that the Dams of all 4 of the future stars listed above still reside in Ohio and are producing future Ohio Breds. Both farms retained around half of their stock to sell privately or as yearlings.

OTBO would like to congratulate these breeders on a job well done in representing our state program on the national stage. We also wish the new owners the best of luck and success racing in the Ohio State race program. 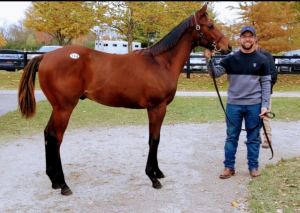 Facebook
Twitter
LinkedIn
Email
PrevPreviousTivis Truly Triumphant!
NextStakes Victors a “Tail” of Two Seasons So to Speak at Mahoning on SaturdayNext
Sponsored by: