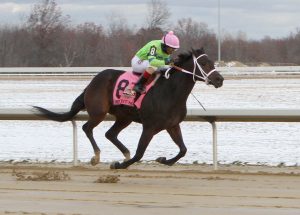 -$200,000 Steel Valley Sprint for three-year-olds
goes to Mo Dont No via disqualification-

Mark Loewe, Vice-President of Ohio Racing for Penn Gaming said “We are pleased with the numbers posted. Today’s card had several strong performances as well as several very competitive races featuring big fields and they were well received by our horse racing fans and bettors.”

In the Steel Valley Sprint, which at $200,000 is the richest race offered at Mahoning Valley Race Course, Mo Dont No was awarded the victory after Awesome Banner, who crossed the wire two lengths in front of Mo Dont No, was disqualified for causing interference in mid-stretch when the Board of Stewards upheld jockey Luis Colon’s objection. Sent off at odds of 5.90 to 1, Mo Dont No returned $13.80 to his backers for the win, his eighth in eleven starts in 2016. Bandwidth, the betting favorite at 1.10 to 1 after a pair of impressive victories was next across the finish line in third. Front Pocket Money followed in fourth, with Riding in the Wind, Second Shot, Nicaradalic Rocks and Will Munnings completing the order of finish.

Following the race winning jockey Colon stated “He (Awesome Banner and jockey Tyler Gaffalione) came out right in front of me at the eighth pole, I had to grab my horse and angle him out, and it definitely cost us our momentum. You hate to see anyone lose a race on a Dq, but it happened and I am glad the Stewards agreed.”

Owned by Loooch Racing Stables Inc. and trained by Jeff Radosevich, the son of Uncle Mo was a $50,000 Keeneland yearling purchase earned $120,000 for the win and bolstered his seasonal bankroll past the $400,000 mark. 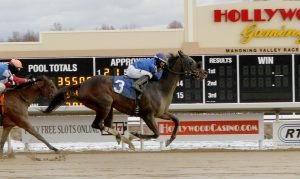 Earlier on the program Regia Marina ($5.20) rallied from last to take the lead in the final 200 yards and then edged clear to earn her first Stakes victory in the $75,000 Hollywood Gaming Mahoning Distaff. Ridden by Albin Jimenez, the four-year-old Medaglia d’Oro filly covered the six furlongs in 1:12.87 and defeated runner-up She’s a Bootsy Too by more than 1 ½ lengths. Luckyallmylife, who set the early pace of 23.22 and 46.99, held on to finish 3rd, followed by Needmore Flattery and Donita’s Ruler. Kyles Marigold was next across the finish line in sixth after encountering traffic issues in the stretch. Firey Diamond, Helluva Notion, and Tiffany Case rounded out the complete order of finish.